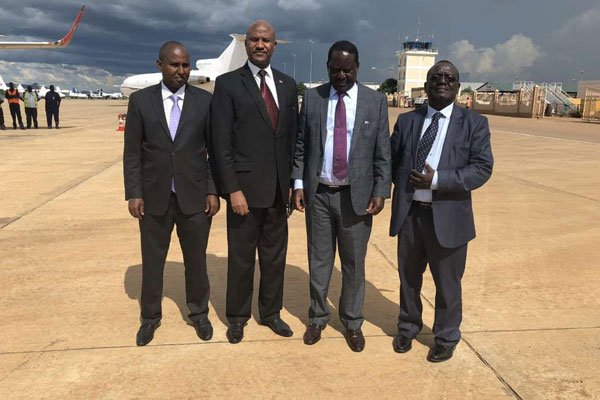 According to Kenyan Daily Nation, the two met for seven hours in what seemed to usher in Odinga’s full-blown role as an African Union special envoy.

He is also the official representative of Kenya in the South Sudan peace process.

“An envoy of peace is a natural fit for Raila Odinga because he is one of the architects of very many handshakes in this country,” said Mark Bichachi, a Kenyan political analyst.

Mr Odinga is expected to visit SPLM/A-IO leader Riek Machar, who is under house arrest in South Africa.

Mr Bichachi said the efforts of Raila Odinga to mitigate conflict in South Sudan is important given the fact that he has experience in other peace processes in his home country.

“Raila Odinga has demonstrated more than once that he has the capacity to bury the hatchet,” he said while speaking on Kenya’s premier Sunday political show on KTN.

Last week, South Sudanese delegates to the peace talks in Addis Ababa failed to sign a  deal at the end of the second round of the High Level Revitalization Forum.

They only handed to IGAD their positions on the bridging proposal on governance and security.