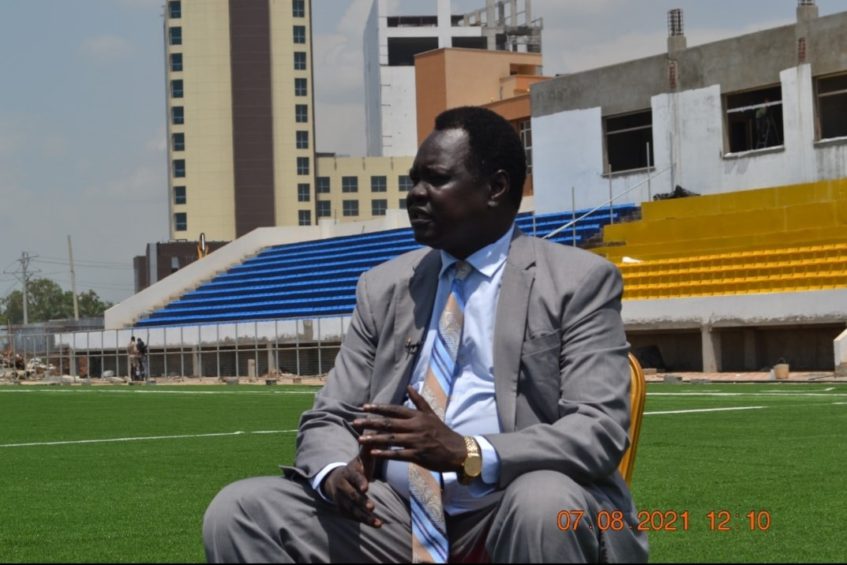 The South Sudan Football Association says work to complete construction of the national stadium in Juba has stalled over a shortfall of the five-million dollars donated by FIFA.

This is because the football body says there were flaws in a contract the former administration signed with a construction company.

The construction which started on the 5th of April 2019 was supposed to be completed this month.

But after reviewing the contract, SSFA said it found out that some important facilities were not incorporated in the contract.

These include a flush night light system, septic tanks and a sewage treatment plant including the crowd stands.

Augustino Maduat, the president of South Sudan Football Association SSFA told Eye Radio that those facilities when added up together will cost between 2.5 and 2.8 million dollars – an amount the association is lacking.

“During the reviewing the contract, we have discovered so many things lacking, one the plan was not including the seven mile because the plan was for them to make the septic-tank, and septic tank for thousands of people that will be attending at the stadium is not good”, Maduot said.

“There was no fence in the plan and we see it’s important because to secure the stadium you need to have a fence.

“There was no plan for a flat light in the stadium, you cannot have the stadium without a flat light. It’s not stipulated in the contract that the chairs that are available now are not confirmative with CAF.”

Asked what he will do next, Maduot said: “We have reported to the ministry in order to decide whether we just keep continuing to get resources and we complete and leave the past or there should be somebody to answer to all these.”