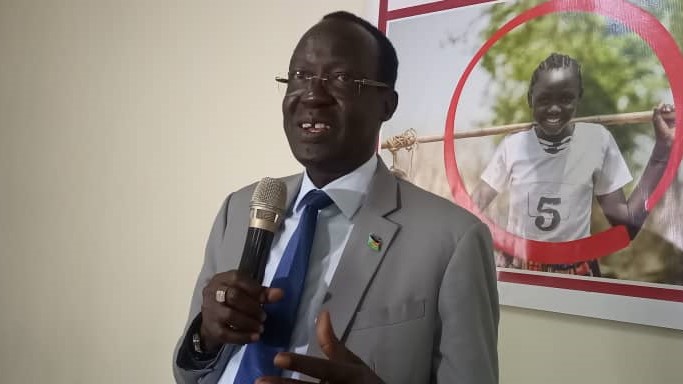 The Minister of Labor says over 70 percent of the country’s youth population are idle, making them prone to mobilization for wars of individual interests.

James Hot Mai asserted that there is a need to engage young people through vocational training programs in the country.

He made the remarks while addressing a graduation ceremony of vocational college students in Juba yesterday.

“Our youth populations, 72 percent youth are idle, and any body come and mobilize them to go to war because there is nothing that they are doing,” said the Labor Minister, who didn’t provide reference.

However, reports indicate that young people constitute almost 72% of the population in South Sudan, yet they are the most unemployed.

Youth employment rate in the country is said to be at only 12%, an estimate that researchers attribute to high rate of illiteracy, resulting from decades of conflict before and after the independence.

This week, around 600 students graduated after attaining a three-month skills training certificate at the Multi-purpose Training Center in Juba.

Minister Mai said the vocational training courses will give young people the opportunity to develop themselves and abandon political conflict.

“But with this training, am sure these youth and the previous one will decline senseless wars, because if they go to war, they will not get what they are doing now. I know many of them, they are getting money more that ministers themselves,” he said.

“With you the 598 graduating class, our market is now happy because we are sending about 598 people to the market,” the minister added.

In January last year, the Minister of Information Michael Makuei told the youth to not be lazy and do manual jobs.

Minister Makuei described some youth in the country as “lazy” and wasting time chatting at under-tree tea places.

He appealed to the young people to explore private sector jobs and avoid the tendency of looking up to the government to give them white collar jobs.

“I have been telling them that you are lazy [because] our people all expect white-collar jobs [but] the government will never give you anything,” he said.

Makuei appealed to young people to use their muscles and stop wasting time playing dominos and sipping tea under trees, and expecting government appointments.

“What you will be getting in the market -doing manual work, using your muscles, will bring you more money than any other person, even better than me,” he asserted.

However, according to reports, the private sector growth in the country faces major challenges including political instability, patronage, corruption and economic uncertainty.