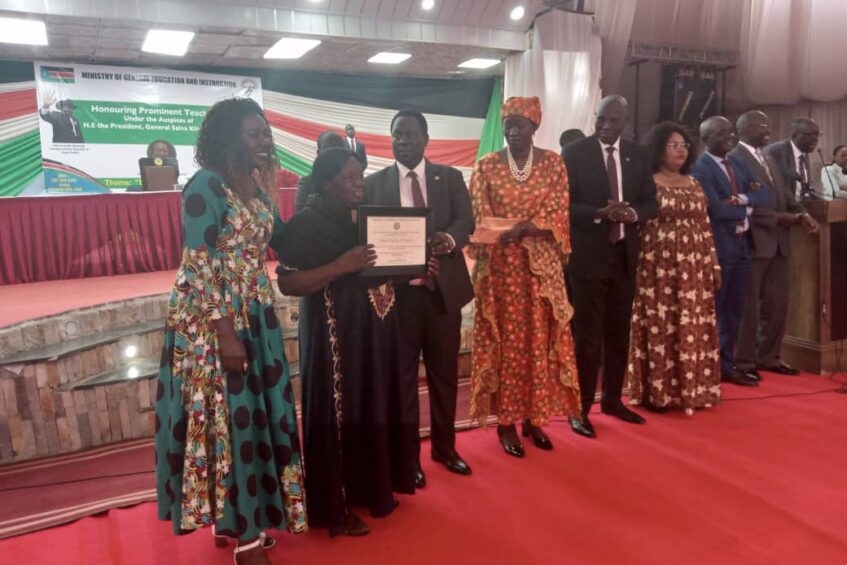 The Ministry of General Education and Instructions has awarded 51 prominent teachers from across the country with certificates, as acknowledgment for their services on Tuesday.

The teachers were honored for their hard work in the field of education and “the nationalism in their hearts” toward the nation.

Speaking during the event, the vice president Hussain Abdal bagi Akol who also the chair person for service delivery cluster said the day is to celebrates for their duties and patetrosim.

“Today, we are celebrating the service of 51 prominent teachers around the country for discharging diligently their nationalistic and patriotic duty in teaching generations of students,” said VP Akol.

According to the UK-based Institute of Development Studies, education as a fundamental human right, is one of the key principles underpinning the Education 2030 Agenda and Sustainable Development Goal.

However, the education system in South Sudan has deteriorated since independence, and after the eruption of violence in 2013, in terms of infrastructure, staffing, access, and school governance.

Primary and secondary school teachers in the country remain poorly and irregularly paid, with an ordinary teacher at public schools receiving less than 10 dollars a month, as salary.

“Throughout their lives time and in regeneration of their contributions to the nation building, we are awarding them with the certificate of service as an acknowledgment for the public service,” said the vice president.

In the same statement, the head of Service Delivery Cluster in the Presidency, added that there has been a high level of school dropouts due to factors such as lack of schools and  qualified teachers.

“Children are out of the school because they don’t have teachers and if they have schools and teachers the teachers are not qualified.”

“South Sudan have about 60000 teachers in total, half of whom have no qualification teachers have left teaching in order to get good pied jobs.”

Meanwhile, one of the recipient of the awards, Ustaza Agnes Lukudu said education is the basis for every strong nation.

She urged the government to initiate boarding school system to unite the citizens.

“I wish to take this opportunity to call for a return of the boarding schools, for sake of unity long time ago trough these boding schools we thought the way to unity togetherness and joined responsibilities.”

The honoring event was organized under them: ‘teachers inspire and build societies.’

The event was first of its kind from the education ministry, to honor teachers for their efforts in offering knowledge to the nation.