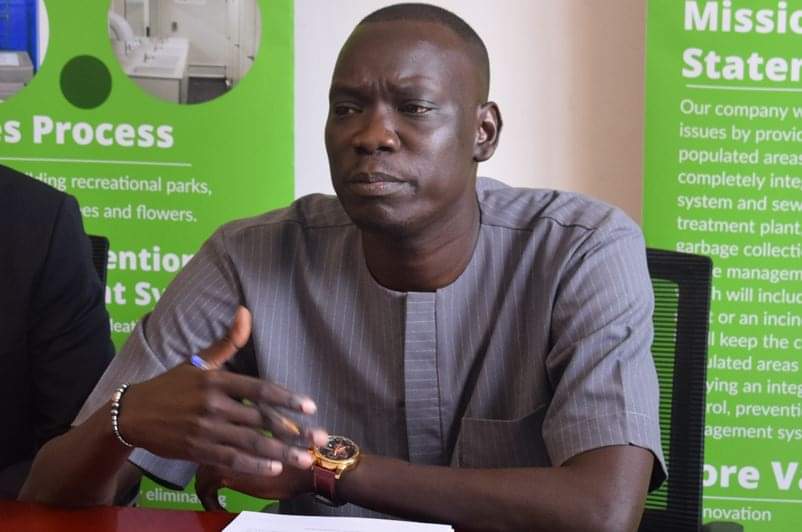 Goaner Timothy, the Managing Director of the East Africa Go Green Company addressing media at his office on Tuesday in Juba, April 5, 2022 - Courtesy

On Tuesday, Kalisto Tombe, Director of Public Health at the city council said the company failed in its cleaning mandate despite collecting fees from the public.

In response, Goaner Timothy Tutlam, the CEO of the Go Green Company says some city authorities closed the Juba-Nimule and Juba-Yei road garbage dumping sites, forcing them to stop the service.

“If the dumping site is closed, that means our operations stop, we cannot take the waste and dump it anywhere,” said Goaner.

Speaking to Eye Radio on Wednesday, he termed the statement by the city council’s director of public health as very unfortunate.

“For him to just say that we have failed is unfortunate. We are trying to fix the issue, as a problem that has been there since CPA for the last 17 years, only to hear this from one of the officials,” he said.

“Although he is entitled to his own opinion, it’s good to give the context for what happened. You will never see the accumulation of waste like that unless there’s closure at the dump site.”

Juba City Council have signed a Memorandum of Understanding with the national firm – East Africa Go Green Company to collect garbage and beautify the country’s capital.

When asked whether there was a misunderstanding, Robert Malik Kuany, a board member of the company says the management is in good terms with the Juba City Council.

“As East Go-Green, we don’t have any issue with Juba City Council because they give us a contract of three blocks of Juba, Kator and Munuki Block, and when we brought our vehicles to start the work, City Council told us to start our work,” he told Eye Radio.

Malik told Eye Radio that they have been diligently doing their work in the designated residential areas.

“So now, if you move around these blocks of Juba and Kator you will not get any garbage on the roads. There, we have 100 garbage bins that we have distributed to them, and you cannot get any accumulation of garbage.”