You are here: Home  |  Education | Featured | News   |   15 young South Sudanese win YALI fellowship to the US

15 young South Sudanese win YALI fellowship to the US 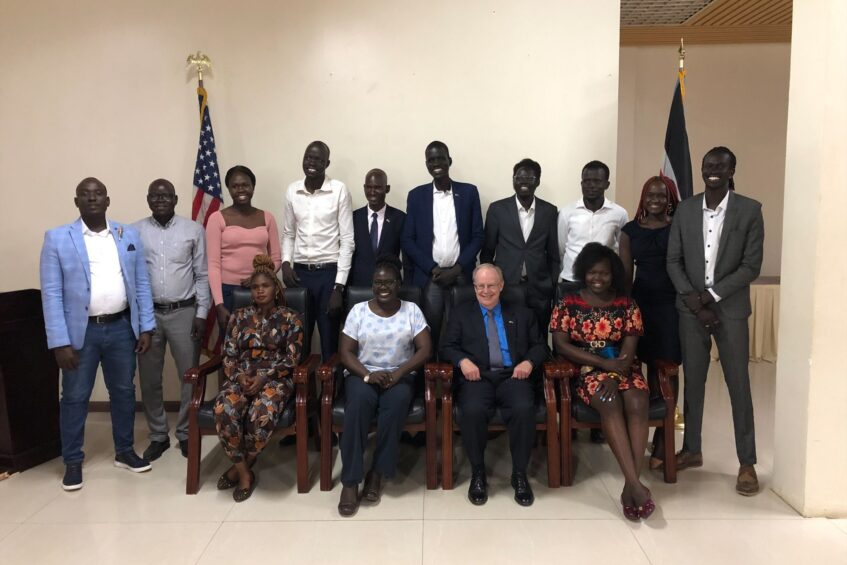 Winning a fellowship opportunity to a western country like the United States, is a feeling that only the dozen young and ambitious South Sudanese YALI darlings will explain.

Comedian and actor Akau Jambo is one of the 15 young professionals that have been nominated for a six-week learning opportunity with the US funded Mandela Washington Fellowship program.

The award-winning comedian, who is also a Co-Founder of the Juba International Festival was one of the favorites among a whopping 500 applicants across the country.

They will be part of 700 remarkable young leaders selected from across the Sub-Saharan Africa to build their careers at various American universities and colleges.

Jambo told Eye Radio that he was pumped to receive the exciting news on top of another exciting day; his birthday.

“It was such a good day for me. The funny thing is, I got the news on my birthday. I had just entered this office then I got the email and I tapped, and I saw, congratulations. I was like Yoooo, this is a good day for me, it’s my birthday, I am excited that I am going to America,” he said.

In the next two month, the comedian will leave for the US state of Michigan where he would be attached a theater for the fellowship.

“I am really expecting a lot, most importantly I am trying to really make my mind ready to learn a lot about connecting the world of art and the society, and how to address issues and the impact of art on the society,” he said.

One of the nominees is Rombek Isaiah, an entrepreneur and founder of Global Aim South Sudan.

He says visiting America would give him an opportunity to see the outside world.

He also stated that the opportunity will also help him better understand how a diverse community of different racial backgrounds live together as the most powerful nation on earth.

“This is like a dream come true. I expect to meet diverse people in the US and from my fellow African youths. I also expect to strengthen my network through that meeting besides my academics and the knowledge that I am going to get in terms of leadership,” Isaiah said.

Young people in South Sudan are said to account for the highest population of the country.

However, only 12% of the youth are employed, thus making them one of the most underprivileged in the society.

A 2019 study by the UN Development Program has found that more than 90 percent of South Sudanese youth lack formal employment opportunities.

The report says even with the goal of a meaningful implementation of the Revitalized Agreement, the danger of persistent youth marginalization remains a threat to the country’s growth.

But, despite the odds, daring youth are determined to ride themselves off the poverty line.

In the hardly stable country, young people are venturing into the private sector with the help of developmental and humanitarian agencies.

“To experience professional life outside South Sudan or outside the continent, I think this is one of those opportunities that you can never miss to learn something new,” says Lydia Lagano, writer and one of the female nominees.

“It’s a great opportunity for me and the other fellows that are going to go with me to experience different professional cultures,” she added.

The U.S Embassy in Juba has selected the fifteen young South Sudanese based on their current skills and contribution to their communities.

The participants will be in the U.S for about six weeks where they will be assigned to different states to learnt skills in various fields.

Moulik D. Berkana the Public Affairs Officer at the American Embassy in Juba says the fellowship is a professional building opportunity.

“They build skills, they network, they have academic programs, projects that they are doing and different focusers. It could be agriculture, entrepreneurship, technology,” Bekana said.

For his part, the U.S.Charge d’Affaires, David Renz applauded all the participants who made it to the end.

“What I really want to say, this is going to be a fantastic experience for you. And it’s something that means a lot to me to be able to go through my country to give you this experience,” Ambassador Renz told the fellows.

He calls on them to take the opportunity to build themselves, change to their lives and better their communities.

“America invests in people. Most important resources that this country has is not the cows, it’s not the farmland although that is really valuable in this country cause its fertile when used, it’s the people, and it’s all the people whose life you will touch when you come back.”

The Young African Leaders Initiative was launched by former President of the United States Barack Obama in 2010.

Apart from the Mandela Washington Fellowship, the U.S. Embassy does other youth focus programs through YALI.