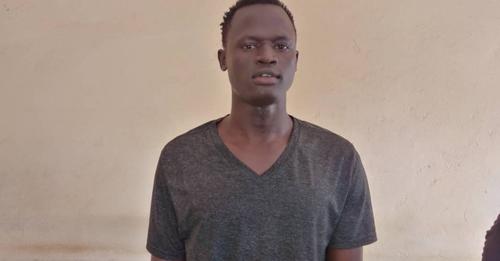 Magai Matiop Ngong – a South Sudanese teenager was sentenced to death by hanging when he was just 15years old.

Amnesty International made several calls for the government of South Sudan, especially to the President Salva Kiir to commute the death sentence of Magai.

Magai who was convicted for killing his cousin – which he insists was an accident – was convicted with no legal representation during his trial.

In May 2017, a criminal case was lodged at Nimule Police station stating that Magai used his father’s gun to kill his cousin who was fighting another boy.

It was reported that Magai fired the gun on the ground in an attempt to separate his cousin who was fighting another boy in the neighborhood.

But, a bullet reportedly rebounded and hit his cousin Nul Deng Nul, who later died in the hospital.

Magai, who may be roughly 18 years old now, was sentenced to death in November 2017 – while still a child, a decision that violates both South Sudan and international laws.

Justice and Human Rights Observatory South Sudan who represented Magai’s case in court challenged the death sentence awarded before the court of appeal.

In their memorandum of appeal before the court of appeal, they argued that the trial court had wrongly sentenced the accused, who according to them was less than eighteen (18) years old.

The further stated that article 21(2) of the Transitional Constitution of the republic of South Sudan provides that: “no death penalty shall be imposed on a person under age of eighteen.”

They also quoted some provisions from the Penal Code Act 2008 and Child Act, 2008 in favor of the accused.

In August 2021, the Supreme Court presided by Judge Chan Reec Madut decided to set aside the death sentence that was imposed on Magai.

The court of appeal in exercise of its appellate powers confirmed the conviction of the accused under section 206 of the Penal Code Act 2008.

It quashed the death penalty awarded on the belief that, accused Magai was less than eighteen years old at the time he committed the offence.

Judge Chan Reec Madut sent the case papers back to the trial court to reconsider the sentence that shall be imposed on the accused in accordance with the provisions of section 8 (d), 9 and 11 of the Penal Code Act 2008.

The Chief Justice referred the accused – Magai to a medical officer to assess whether the accused was a juvenile or an adult person at the time he committed the crime of murder.

For their part, the advocate for the deceased filed a memorandum of appeal before the Supreme Court in Juba in September 2020.

The grounds they raised are that the court of appeal shouldn’t have accepted the appeal of the convict because it was submitted after 15 days fixed for the allowance of the appeal.

The accused stated clearly before the trial court that he was eighteen year old and according to them was born in 1999.

Therefore the accused according to them deserves the death sentence which the deceased’s heirs requested to be imposed on Magai.

The advocate for the deceased in conclusion wanted the court to intervene and quash the decision passed by the court of appeal and restore the death sentence passed against Magia by the trial court.

Magai spoke to Eye Radio’s Journalist, Michael Daniel after his death sentence was set aside for retrial.

He stated that he had no legal representation during his trial.

“I was alone without a lawyer or family members. It was a big challenge for me finding myself standing there alone and isolated for 24 days,” said Magai.

“I couldn’t believe it when I heard the judge imposed the death sentence on me. I was chained and kept alone because the prison was for only minor crimes and I was the only one with a death sentence conviction.”

“I will tell them the negative effect of the crime on youth life and I am sorry for what happened.”

Magai had a chance again to see the sun after five years behind bars.

“I don’t know when I will walk out again,” he said.

According to Magai’s Lawyer, many juveniles still stand the risk of being sentenced to death.

Godfrey Victor says this is happening because there are no proper facilities to assess age in the countryside.

“Not having these facilities forces the juvenile being convicted to death because our court will be struggling to determine the age of the juvenile,” Godfrey said.

“Most of the parents don’t take it seriously to assess their age.”

“If a juvenile is found guilty, we should follow the Child Act, 2008.”

“There is a problem on the side of the prosecution, he should have taken this juvenile to assess his age and confirm it doesn’t lead the court to struggle to determine the age.” he concluded.

The Chief Justice noted that the accused lacks both birth certificate and assessment of age certificate.

Judge Chan Reec says no medical opinion which can be used in proof of Magai’s age was sought and this in my opinion created doubtful situation.

“In the case before us, the age of the accused was stated at the pretrial proceedings (Police investigation) as fifteen (15) years,” said the Chief Justice.

“No medical evidence was provided with regard to his age and neither the prosecution nor the trial court sought this medical opinion.”

“The prosecutor believed that the accused was fifteen (15) years old while the trial court considered his age to be eighteen year old when he committed the crime and none of them sought any medical opinion on this matter despite its importance.”

The Chief Justice says the age assessment is affected by a medical officer.

“I am of the view that, after confirming the conviction under section 206 of the Panel Code Act, 2008 and setting aside the death awarded,” Chief Justice Chan Reec stated in his judgment.

“We send back the case papers to the trial court to refer the accused to the medical officer or doctor for age assessment and to strictly ascertain whether he was a juvenile or an adult at the time he committed the crime convicted of and thereafter pass the sentence accordingly.”