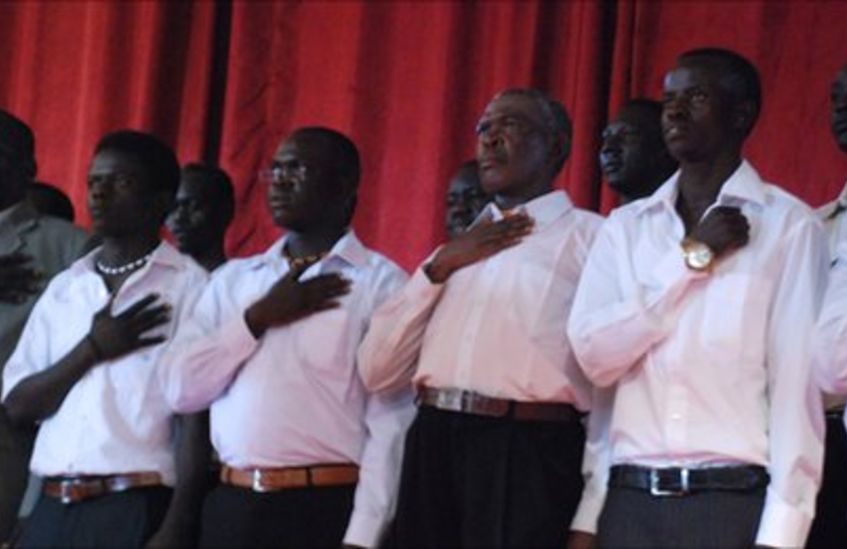 The man behind the South Sudan national anthem has dragged the government to the regional court over royalties.

In January 2011, Mido Samuel participated in the writing and melodizing of the anthem titled: South Sudan Oyee!

The lyrics of the national anthem were written by 49 poets, who gathered together to write the verses, following guidelines set down by the army.

The government technical committee – headed up by Joseph Abuk – then called on musicians to melodize it.

“I paid for the production and facilitated the practice whereby the University of Juba students, who were part of the choir, sang the anthem, he told Eye Radio.

The musician now says it has been over 10 years but he has not received any money from the government, nor has it “recognized me”.

And due to his current health situation, he says has no choice but to fight for what he is owed.

“I am now suffering from stroke, but no one came to see or help me with money,” Mido explained.

“I filed my case with the registrar and they have submitted it to the court. I am waiting for the court to call me and notify the government of South Sudan.”

Mido declined to disclose the amount of money he demands from the government.

This is not the first time an artist has accused the Kiir administration of failure to live up to its promise.

In 2012, the designer who made the South Sudan Coat of Arms threatened to go to high court to seek for an order, barring it from using his artwork due to unpaid royalties.

Eye Radio’s attempts to reach the concerned authorities were not immediately successful.

We praise and glorify you

For your grace upon Cush,

The land of great warriors

And origin of world’s civilization.

Arise, shine, raise your flag with the guiding star

And sing songs of freedom with joy,

For peace, liberty and justice

Let’s stand up in silence and respect,

Saluting millions of martyrs whose

We vow to protect our nation.

Land of milk and honey and hard-working people,

Uphold us united in peace and harmony.

The Nile, valleys, forests and mountains

Shall be our sources of joy and pride.