The daring S. Sudanese aid workers betting with their lives 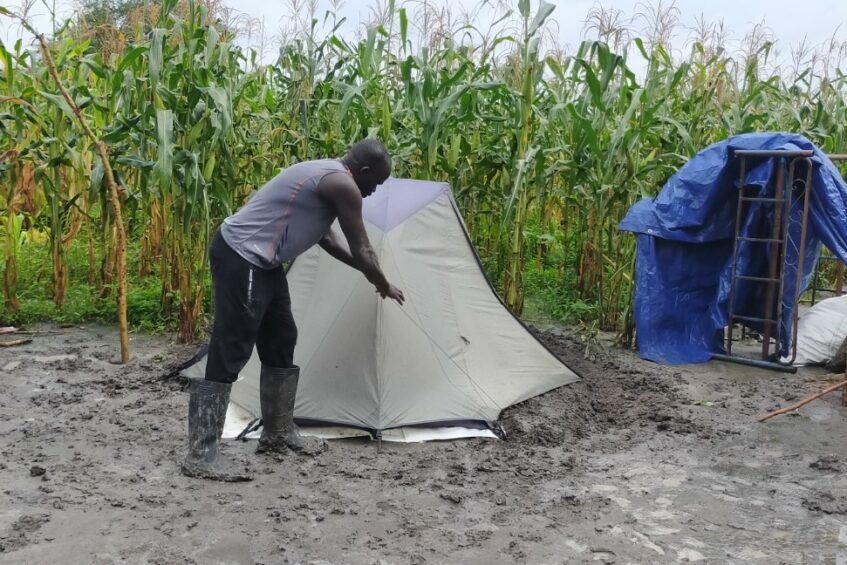 Wani James Oso preparing his camping tent in Kulaliet in Jonglei Canal, after a long day of head count of the people receiving food assistance from the World Food Programme(WFP) in the area. Photo credit: WFP

On the World Humanitarian Day, we feature Wani James Oso, a dedicated aid worker, passionately assisting vulnerable populations in the face of a challenging environment, in the remoter parts of the country.

He ventured into the humanitarian sector more than a decade ago, and provides life-saving assistance in many parts of the country.

“As a humanitarian agency, you see someone is suffering somewhere who need a service and you feel like you have to give,” Oso told Eye Radio on the occasion of World Humanitarian Day.

“Seeing someone somewhere suffering, I’m like I have to help …. because my aim is to transform and save lives,” he added.

August 19th is a global campaign to shine light on thousands of volunteers, professionals and crisis-affected people who deliver urgent health care, shelter, food, protection, water to those in need.

According to the UN, about 460 aid workers were attacked around the world in 2021 alone, resulting in the death of 140 humanitarians, the injuring of 203 others. About 117 staff were also kidnapped.

Nearly all those killed were national staff and few were international staff with majority working for national NGOs, the world peacekeeping body noted.

It added that most of the attacks took place in South Sudan, Afghanistan and Syria.

“It is a heartbreaking to see a colleague whom you worked with for a decade and in just a moment to disappear or to be killed in front of you,” said Oso recalling one traumatic experience while delivering humanitarian assistance in the field.

In one of the their field trips in the hard-to-reach areas of the country, he said his colleague was kidnapped and killed by armed assailants.

“We were from behind coming from the field and then immediately the attackers came, we were stopped, one of us was taken, and things happened from nowhere we just heard a bullet and we didn’t know who is who,” he added.

So far, about 130 aid workers have been killed since South Sudan gained independence in 2011.

According to reports, South Sudan continues to be the most violent context for aid workers, followed by Afghanistan and Syria.

A week ago, three aid workers on a humanitarian convoy were shot dead in the line of duty in Ikwoto County of Eastern Equatoria State.

This bring a total humanitarian workers killed in South Sudan since the beginning of this year to five, according to UN humanitarian agency.

Yet the situation has not deterred Wani, a father of three, who, for the last decade has continued to brave the difficult situation by frequently visiting the far-flung areas to reach the needy populations with assistance.

In those remote locations, there is no clean drinking water, no health facility, no basic infrastructure and no hope for people, he said.

“You don’t see any service apart from the food that we are giving. Things like healthcare and nutrition service are not there, even accommodations.”

South Sudan is facing the aftermath of its worst floods since 1960, with over 835,000 people affected.

The country’s humanitarian needs overview for 2022, estimates that more than half of the population are in need of humanitarian assistance.

“When you look at the locals in the area, the water they are drinking, if you who came from outside try to drink that type of water, I am sure you will not service for three days.”

Despite the blockade of humanitarian assistance by the seasonal floods, aid agencies still dare the difficult environment.

“As humanitarians, our motto always is that we are neutral we don’t take side. Our core aim is to save lives, and we pledged on his behalf and say we should not be targetted,” he said.

However, floods is not the only challenge. Local media outlets constantly report attacks on aid workers as a result of the rampant insecurity across the country.

UN agencies in South Sudan have often called on stakeholders and parties for joint action to address humanitarian crisis and end attacks against civilians and aid workers.

She urged all parties to protect aid workers striving to uphold the living standard of vulnerable population.

“We should fight poverty and fight all the major crisis that affects the people of South Sudan,” she stressed.

“I would like to take this opportunity today to remind all of us that it take a village to address the need of the people of South Sudan,” Beysolow told reporters during a press conference in Juba on Thursday.

Early this month, the United States appealed to the South Sudan authorities to prioritize the needs of its citizens by addressing insecurities and drivers of sub-national violence.