S Sudan fourth most dangerous country for journalists in 2021 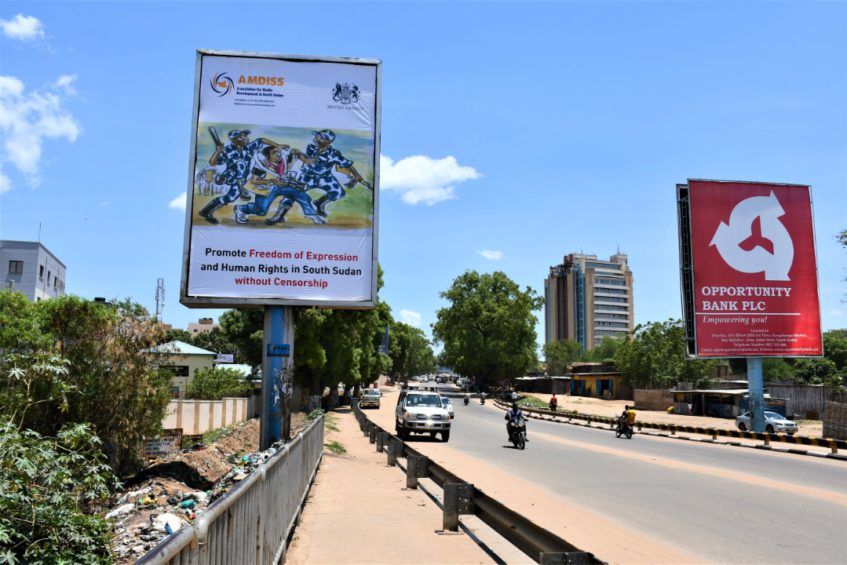 A billboard bearing a message titled: "Promote Freedom of Expression and Human Rights in South Sudan without censorship." erected by Association for Media Development in South Sudan on a road leading to the Malakia Police Station toward UAP Tower in Juba - credit | AMDISS | Juma

South Sudan still maintains the fourth place as one of the world’s worst countries in terms of prosecuting killers of journalists, a position it earned in 2020 report.

This is according to the new data of global impunity index released by the Committee to Protect Journalists.

The latest report titled ‘Killers of journalists still get away with murder’ highlights unresolved killings of journalists in countries where “members of the press are singled out for murder and the perpetrators go scot-free.”

It shows 81% of journalist murders were not accounted for across the world in the last 10 years.

South Sudan has 5 unsolved cases of murder against journalists since September 2011.

The Media Authority Act of 2013 prohibits the unlawful arrest, detention, harassment, intimidation and torture of journalists.

However, since the country’s independence in 2011, many journalists have reportedly abandoned the profession and some left the country due to what they term as a ‘hostile’ media environment.

Meanwhile, Somalia tops the list as the world’s worst country with 25 unresolved murders followed by Syria and Iraq with a record of 21 and 18 unresolved cases of murder respectively.

Afghanistan, which stands 5th in the list, has also seen an increased danger facing journalists after the abrupt fall of the country to Talibans in August this year.

Hundreds of journalists are said to have fled the country due to fear of the Taliban’s brutal record on press freedom.

According to the International Federation of Journalists, South Sudan Journalists are frequently harassed, intimidated, beaten or abducted and sometimes killed.

Last year, the UK Ambassador to South Sudan called upon the government to guarantee the safety of journalists to allow them to do their job freely.

Ambassador Chris Trott made the remarks in an event to mark the international Day to End Impunity for Crimes against Journalists.

“We hear regular reports of journalists detained for doing their job. This is unacceptable as is the random censorship that leaves blank sections in our newspapers here in Juba,” he said.