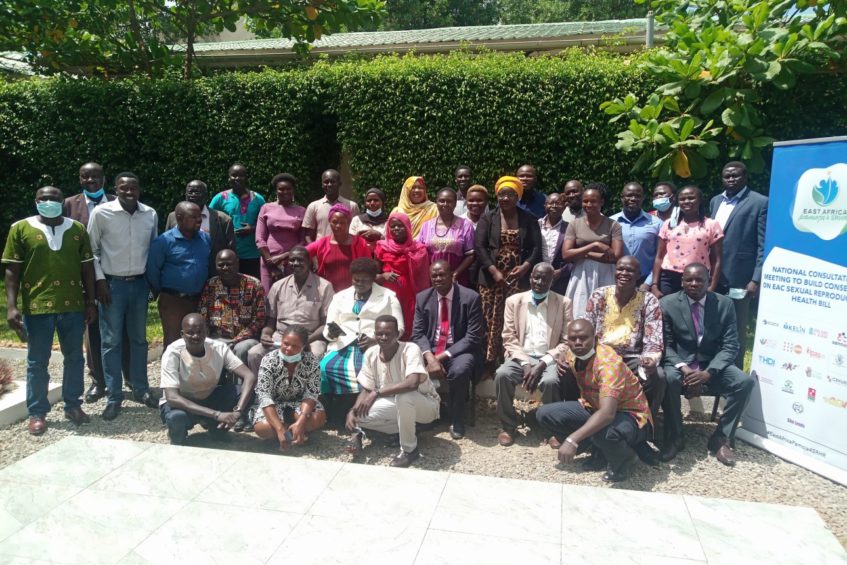 Members of parliament representing South Sudan at the East African Legislative Assembly with some of stakeholders taking a group photo during a two-day consultative meeting in Juba from 5 - 6 Nov. 2021 - credit | Chany Ninrew/Eye Radio

Members of parliament representing South Sudan at the East African Legislative Assembly have conducted a two-day consultative meeting, with stakeholders on the East African Community’s Sexual-Reproductive Health bill in Juba.

During the meeting, women advocates and other stakeholders have called on the government of South Sudan to endorse the sexual and reproductive health bill once it’s passed by the East African Legislative Assembly in Arusha.

This is in a bid to help eliminate all forms of gender related malpractices in the country.

The East African Legislative assembly is currently conducting similar consultative meetings in all the partner states in order to hear public voices before passing the bill into law.

The two-day workshop brought together participants from the ministry of health, ministry of gender, civil society, faith based groups, women and youth.

If passed, the bill seeks to facilitate and promote the prevention of newborn child and maternal mortality from all preventable causes.

It also intends to promote reduction and elimination of unsafe abortion, HIV and other sexually transmitted infections, as well as early pregnancies.

Janet Michael, a representative of the ministry of health says reproductive health is a fundamental human right.

“We are already in the global village and we have moved ahead. There are a lot of policies that are being set up even before; this bill will also set another step,” Janet Michael said.

“This bill is taking sexual reproductive health ahead because we know a lot of issues that have risen, we are talking about traditional laws, taboos and culture which are actually impeding the development of our society.”

“When we look at that most of these laws revolve around the female, young girls are forced to marry early and therefore develop complications, either they die and a lot of them are developing fistula,” Janet concluded.

Some of the participants, who are mostly women, also supported the bill.

“The absent of this bill has sent many of our girls to the grave, to early child marriage, out of school, so definitely we as South Sudan, we are supporting this bill,” one of the female participants said.

“We want to see the end of this bill and after passing it in the East Africa Parliament, we will domesticate this bill so that we progress as a nation.

“I want to thank this dialogue very much because when I was studying in Uganda, they had taught us about sexual and reproductive health, this is some 10 years ago but then I kept on saying I have not seen it I just heard of it at school but then when we came out from school, I came to South Sudan.” the participant said.

“We have been in a number of training sessions and I have never heard about sexual and reproductive health and I am so happy that it happened today,” said another female participant.

“I am really happy that what our mothers did not do, we are now part of it. I know with this bill, everything is going to be alright.”

Kim Gai, a member of parliament representing South Sudan at the East African Legislative Assembly says stakeholders in South Sudan have already had their input in the bill.

“We came here to Juba about the bill of sexual and reproductive health and now it’s in second reading and we are here to consult with stakeholders in South Sudan,” Hon Kim told Eye Radio on Saturday in Juba.

“The stakeholders put their inputs and their concerns because there are a lot of issues here which need everybody to participate.”

According to reports by the Global Health Action, women excessively bear the burden of mortality related to sexual and reproductive health, with one woman dying out of every 126 live births in South Sudan.

Women across all age groups have little choice but to meet the childbearing demands of husbands and their families, the report said.