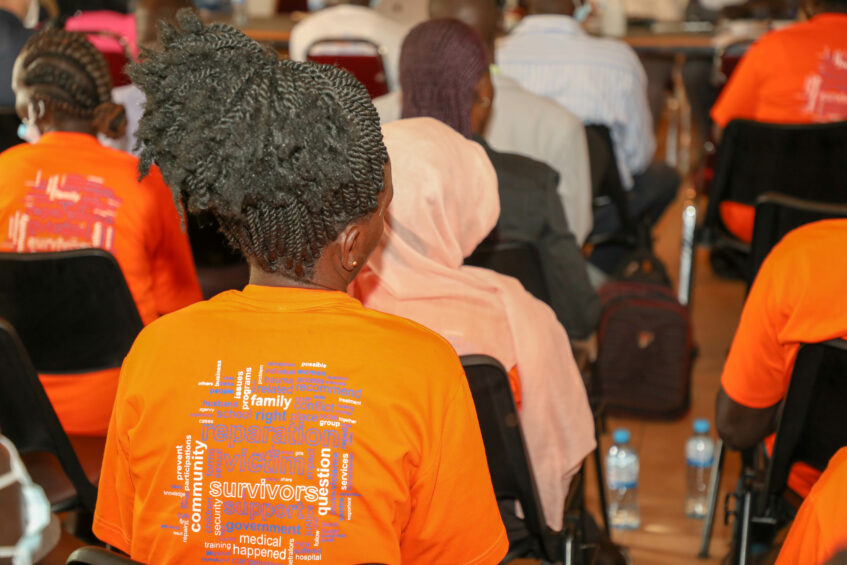 Survivors of conflict-related sexual violence spoke at a panel of discussion with stakeholders from the civil society and law society in Juba. | 15th June 2022 | Photo by Lou Nelson.

Some survivors of conflict-related sexual violence are demanding justice and accountability prior to healing and reconciliation process in the country.

The victims made the call during a panel of discussion organized by the Center for Inclusive Governance, and Peace and Justice organizations.

The panel, which brought together survivors and stakeholders aimed to share experiences of brutal sexual acts committed against women during the 2013 and 2016 conflict.

The discussion was also to create awareness on conflict related sexual violence, ahead of the International Day for the Elimination of Sexual Violence, which is this Sunday.

One of the survivors, whose name Eye Radio withheld said she was raped together with three women as they returned to then Protection of Civilians Site near the Yei Road checkpoint West of Juba, during the 2016 violence.

The women allegedly went out of the former PoCS to search for food for their starving children, when they were allegeldy raped by gunmen at the height of the July 2016 violence.

“What they did to me and my body is too bad, and it also happened to my people, we still not happy, what will make us happy is when they are arrested and put in prison and then brought court to be trial,” she said.

According to her, the child is being called names – something she said shames her most of the time.

“If he admits by coming in person and says yes I did that last time and I am sorry, so if he can come and says sorry I can forgive him, but if he refused I will not forgive him.”

The survivor said she is appealing for justice and accountability, for her to heal and reconcile with her perpetrator.

A year after the 2016 conflict, UN Mission in the country reported that more than 200 people were raped by men in uniform.

UNMISS documented 217 victims of rape, including gang-rape committed by armed actors during and after the fighting between 8 and 25 July.

Another survivor called for protection against rape perpetrators, adding that they risk being harmed if they speak out.

“Arrangement should also be possible, and staff should be trauma training so that they are able to support traumatized individuals. Four in meeting use of face-covering voice distortion and other methods should be allowed to use to protect identity,” said the survivor.

She also urged the international community protect victims and witnesses, in case of possible threats against them.

Last week, the technical committee for the formation of the Commission for Truth Reconciliation and Healing concluded a three-day workshop on witness and victim protection mechanisms in Juba.

The workshop was facilitated by the Transitional Justice Working Group, a body tasked to safeguard and protect the rights of victims through their quest for justice and reparation.

It brought together different stakeholders from the Law Fraternity, Civil Society and the Transitional Justice Mechanism to discuss victims and witness protection under the would-be-established commission.

The participants collectively emphasized that the protection of witnesses and victims is necessary for them to feel safe and free to tell the truth.

Meanwhile, the Deputy Speaker of Council of States Hon. Mary Ayen said the government has established a one-stop center and a gender-based court to try cases related to sexual violence.

“The government has established the gender based violence court that is based in Juba and a number of facilities related in address to this issues like one stop center, safe home and mobile courts were ordered by the government to move around in the states and administrative areas.”

“The purpose is to reach out to survivors and try to bring perpetrators to book, but we also appreciate the role that been played the partners and donors so that the compliment the efforts by the government in addressing this case,”said the lawmaker.

For her part, Jackline Naswiwa, Director for inclusive Governance, Peace and Justice said the government and stakeholders must stand with survivors of conflict related sexual violence for them to heal and feel safe to speak out.

“On this day we remind ourselves of the need to call for action and the survivors have been telling us, not to leave them alone stand with them. Remember, whenever you speak with them they have fears,

“Some of their fears maybe reprisal or denial that sexual violence has happened to them, the stigma that they came with it in the families and in the society, so society need to stand with them, is not their fault but they found them self in that situation but we need to see how we can be able to support them to accept it and move on,” said Naswiwa.

The International Day for the Elimination of Sexual Violence in Conflict is marked every year on 19th June.

It is also meant to raise awareness of the need to put an end to conflict-related sexual violence, as well as to honor the victims and survivors of sexual violence around the world.