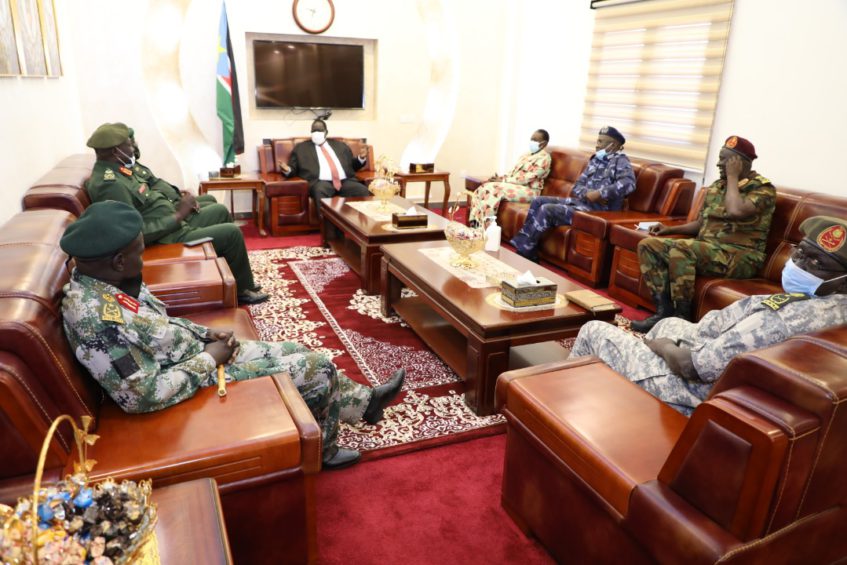 The chairperson of NTC, Tut Gatluak and the heads of security mechanisms during the meeting in Juba this morning/Gore Anthony.

Government and opposition forces undergoing training at various sites across the country will soon be graduated, the defense minister has said.

Angelina Teny says the National Transitional Committee — a body tasked with overseeing the transitional period has promised to avail all the necessary resources for the graduation by the end of this month.

“The security adviser who is the chairperson of NTC has promised to avail us the resources for the graduation so we are very hopeful and it’s very promising,” said Angelina after a meeting chaired by the Chairperson of NTC, Tut Gatluak, and the heads of security mechanisms in Juba, on Tuesday morning.

Over the weekend, a civil society activist called on the parties to the revitalized peace agreement to urgently graduate peace soldiers across training sites in the country.

This is after some soldiers at military training centers said they feel like prisoners after spending a year at the site without being graduated.

But the defense minister cited logistical challenges and lack of funds that have delayed graduation of the forces.

“We have enough uniform for the army here that we have received from friends but for the organized forces, he [Tut Gatluak] just promised that he is going to Khartoum and on his way back, in fact from tomorrow, he is going to start shipping those uniforms because they are ready in Khartoum,” the defense minister said.

“So for us, this is a very good beginning and hopefully, before the end of this month we will see a unified force graduated,” she added.

Forces belonging to different parties to the revitalized peace agreement were assembled at various military training centers across the country in January last year.

The forces are trained as part of the unification of opposition and government armies.

Some of them say they completed the training but have not received a word on when they will be graduated and deployed.

The Joint Defense Board—a body tasked with implementing the security arrangements has postponed the graduation of the forces several times.

Over the past year, Eye Radio has reported about challenges facing the training sites, including lack of food and medical supplies.

These challenges have reportedly forced some soldiers to desert their camps.