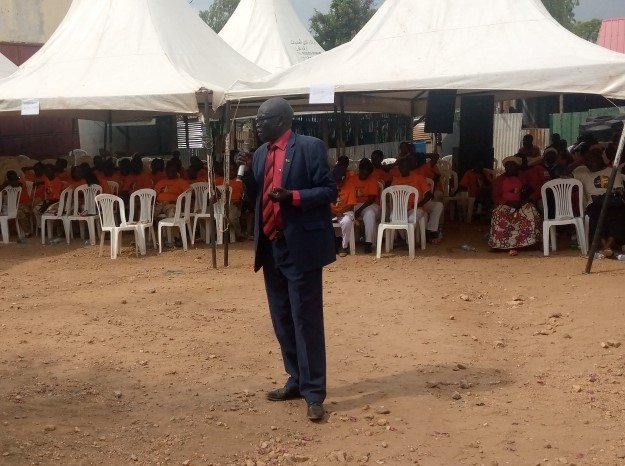 Central Equatoria State Minister of Gender, Child and Social Welfare, Bullen Soro, speaks during the launch of the third celebration of 16 days of activism in Juba. | Photo credit: The City Review.

The Minister of Gender, Child and Social Welfare in Central Equatoria State, is pushing for the enactment of laws providing for more than 15 years in jail for perpetrators of child marriage.

The Minister, Bullen Amos Soro said he has realized that early and forced child marriage and recruitment of children into labor force is persistent among communities in the state.

Soro said his institution is lobbying for tougher laws punishing parties found to be perpetrating early or child marriage.

“We are going to advocate for at least not less than 15 years, for those perpetrators who marry young girls and not only that, we are going to insure that any parents who marry his daughter or force the Marriage of the daughter to marriage,

“Simply because he/she is in need of cow or money he is going to get more punishment then the person is coming to marry and there for we shall propose 17 years for the parents.’’

Child marriage is said to be a deeply rooted cultural practice governed by social norms and groups traditions.

A 2013 study by the Human Rights Watch said the preferred time for a girl to get married in South Sudan, is not measured by her age, but rather by her physical and sexual reproductive development, as indicated by the onset of her “period.”

In the case of men, the emphasis is placed on their capacity to meet the basic needs of and provide support to their own families and relatives in an extended family setting, the rights group noted.

The UN’s children agency UNICEF also suggested in a report that child marriage continues to be an unresolved and serious issue in the country, due to discriminatory social norms, cultural taboos and poverty.

Lack of access to basic services, it says, contribute further to gender inequality and impact girls in many ways, including their right to life and to development to their full potential.

More than half of South Sudan’s girls are married before they enter into adulthood, a practice UNICEF terms as life-threatening, harmful, and a grave violation of children’s rights.

Speaking during the Day of African Child Commemoration held at the Nyakuron Cultural Center in Juba on Thursday, Soro said the ministry is planning to make policies to safeguard the welfare of children in the state.

“The theme of this day is ‘protect children from harmful cultural practices and enhance policy implementation in south Sudan the policies are there, those policies which were there before amended and we are looking forward making policies,” he said.

Meanwhile, an official at the national Ministry of Gender said the relevant states institutions are grappling with finance constraints that have prevented them from enforcing child protection mandate.

The Ministry’s Director for Child Welfare, Celina Grace Peter stated that the ministries of gender in the states are struggling to deliver on their mandates to protect children due to financial challenges.

Although some customary laws condone early and forced marriage, the national transitional constitution, the supreme law of the land states that any child below the age of eighteen is considered as a child.