You are here: Home  |  News | Peace | Politics   |   Obuto threatens to use force against bandits in Eastern Equatoria

Obuto threatens to use force against bandits in Eastern Equatoria 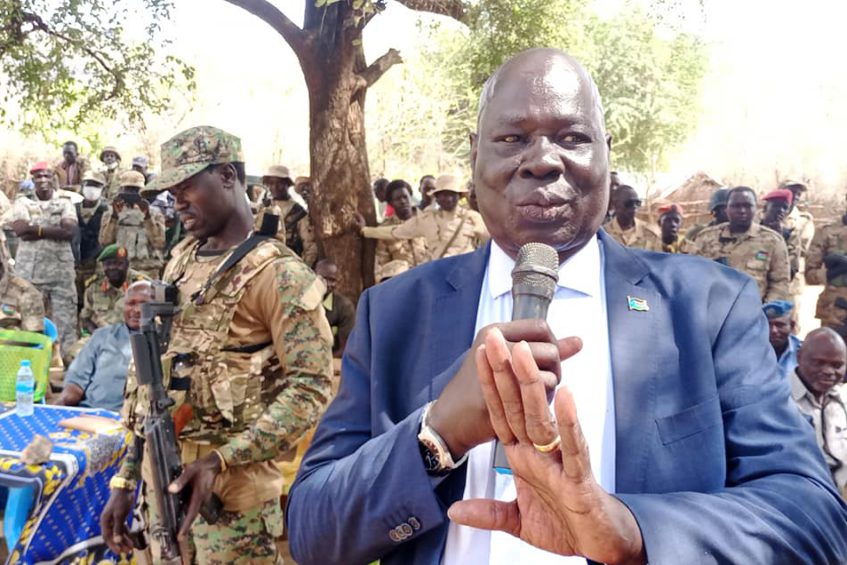 The Minister of National Security has warned cattle raiders and bandits along Eastern Equatoria State highways to desist from the practice.

General Obuto Mamur Mete threatened to use force if the highway bandit in the state did not surrender and hand over their weapons.

General Mamur called on gangsters carrying out ambushes along major highways in the state to surrender or face tough actions.

He was speaking at a public rally at Ngauro Payam of Budi County on Friday.

The Minister who has been in the State on a peace and security mission, strongly warned the locals against involvement in criminal activities.

“Whatever I am saying as your son here is a directive, so that when we come for operation you shouldn’t say you were not told. I am repeating today that I don’t want to hear there are ambushes on the road or cattle raid here,” Obuto said.

“If you continue with the raid and ambushes and cattle raid with the pretext that you will hide in the mountain, you will face the full force of the law.

“If there are youth who are still adamant to listen, please tell them to surrender and join Mamur forces. I am giving you warning, from today onward, surrender because if I returned, this mountain will be a small place for them.”

Eastern Equatoria has been rocked by years of deadly inter-village revenge and counter-revenge killings.

In August last year   five people were killed and seven others wounded by bandits along the Kapoeta-Ngauro road.

In November 2020 an attack on a vehicle belonging to the Governor of Eastern Equatoria state resulted in the death of his bodyguard.

In April last year, Governor Louis Lobong’s bodyguard exchanged gunfire with the attackers in Kyala Payam leaving one of his bodyguards dead.