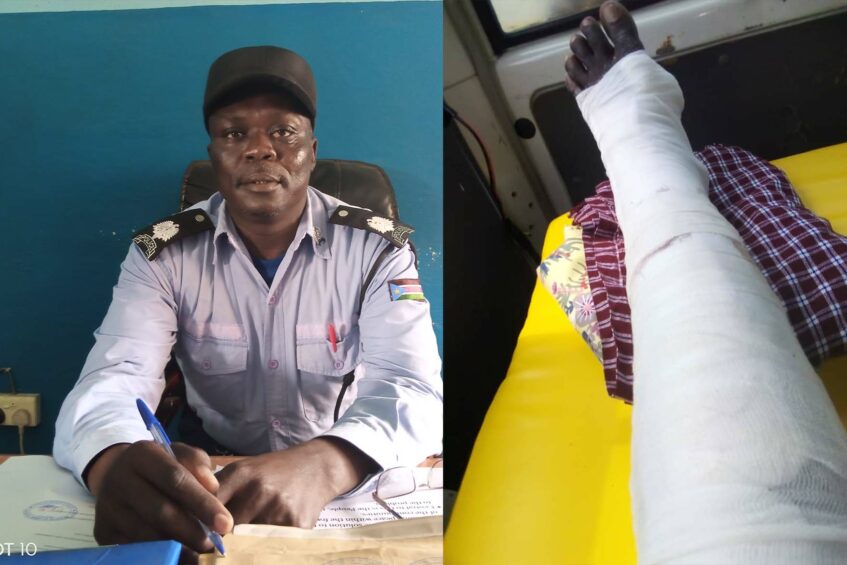 Wounded Inspector of Police in Nimule town nursing gunshot wound after he was hit by a stray bullet/Photo:Courtesy

The Inspector of Police in Nimule town has said he is nursing a gunshot wound after a stray bullet hit his left leg during a demonstration that followed the killing of a chief in the area Monday.

Ebele John was shot dead and two others wounded on Monday morning while they were attending a funeral meeting.

The funeral was of Moses Kanyiri and John who were killed in cold blood in Mugali Payam on Friday.

One other person was abducted and her whereabouts are unknown.

Angered by the Chief’s demise, the mourners took to the streets and placed the bodies of the three victims in the middle of the Juba-Nimule Highway.

“I went out from the office of the traffic because I was there in meetings with some chiefs on the other side. And when we reached the main road where the dead bodies of the three people” said Major David Kasmiro, the Inspector of Police in Nimule town.

The move disrupted movement of motorists for hours, prompting the police to shoot in the air to disperse the protestors.

However, a stray bullet, according the area Inspector of Police, hit his left leg breaking his ankle.

“There was a lot of random shooting towards us from the different organized forces.

“Therefore, I was shot in my left leg and it was broken, and my health is good, now I am trying to be referred for good treatment.”

David Kasmiro, however, says he is now in a stable condition.