You are here: Home  |  News   |   Minister in the Office of the President visits USA

Minister in the Office of the President visits USA 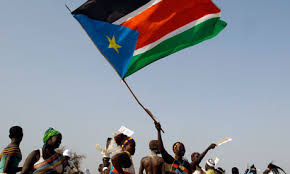 The Minister in the Office of the President, Awan Guol Riak, is in the US for meetings with senior government officials and civil society leaders.

A press release issued by South Sudan Embassy in Washington says Mr. Awan met with officials at the State Department on Monday for discussions on the ongoing peace process and other challenges facing the country.

He also met with heads of the leading global humanitarian agencies, and discussed the crisis in the country and the fate of internally displaced persons.

“The young and innocent ones in our country who do not know why people are fighting are the ones suffering the most,” Mr Awan told aid agency representatives.

“The President has sent me here to see how we can work with you to address the situation in the country, not to point fingers.”

Mr. Awan told them it was urgent the international assist South Sudan to deal with the crisis, and assured them of government’s cooperation with humanitarian agencies.

Mr. Awan is scheduled to meet with officials at the White House as well as with Congressional leaders during his 5-day stay in Washington.

He is scheduled to consultant with the US Department of State, the US Agency for International Development and election experts from the International Foundation of Electoral Systems.