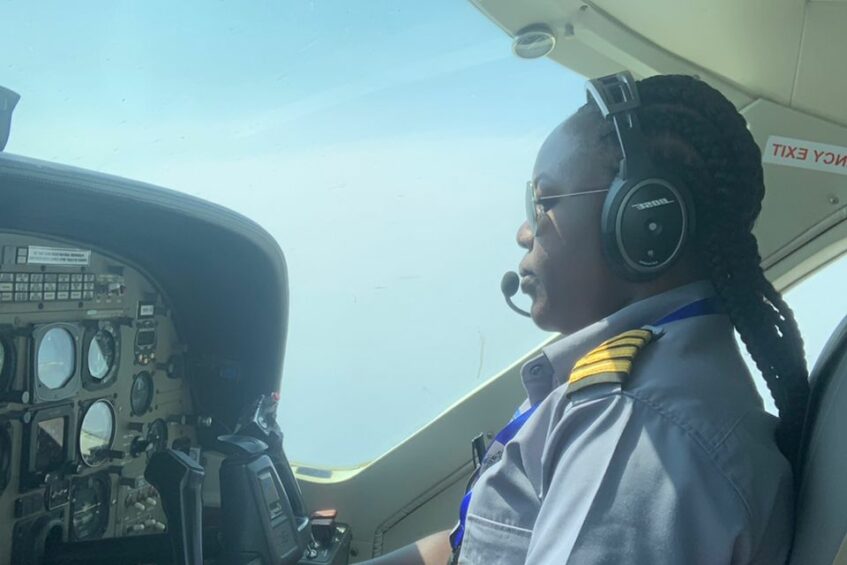 Nancy told Eye Radio that becoming a pilot was her childhood dream.

“I was still young when my dad decided to put us down as his children and ask us what we want to be in the future so for me I told him I want to become a pilot when I grow up.” Nancy revealed.

After completing her piloting course in 2018, Nancy returned to South Sudan and started flying as a co-pilot with a Tanzanian based Shine Aviation.

Nancy said her dream was to work in South Sudan after completing the studies.

This according to her could not work out citing most of the airline companies in the country gives limited opportunities to South Sudanese pilots.

“There are so many of us there in Juba but we have no jobs, there is nothing to do. So you find that we finish the flying school and we come and sit back at home.” Nancy revealed.

In December last year, the South Sudan Pilots Association decried lack of employment for South Sudanese pilots in the country.

The Association said there were close to eighty qualified South Sudanese pilots in the country.

Nance said: “there should be a law ….. at least any aircraft coming to fly in South Sudan should have a South Sudanese pilot as well either co-pilot or a captain.”

“That is how we can be able to help the fellow pilots that are in South Sudan.”

Recently, Nancy got an opportunity to work with Bar Aviation, a largest and leading Aviation solutions service-oriented Airline in Uganda.

She has so far flew to various East African countries such as Kenya, Tanzania and DR Congo.

In Uganda alone, Nancy has flew to different locations containing Heritage sites and the national parks to allow tourists have access to Gorilla and Chimpanzees,  elephants and other large mammals like Leopards, Bush pigs, duiker among others.

Nancy said she is flying at 12,500 feet above the ground with a fixed wing that carry up to 1.2 tons.

Despite being a female pilot, Nancy said: “actually it is not a challenge but it is more of encouragement because many people I fly with are actually happy to see a female pilot flying them.”

To be a pilot, Nancy said there is need for South Sudan authorities to improve education quality to enable students perform better in English, mathematics, physic and Geography.

She is however encouraging students intends to study piloting to have personal embrace personal character such being patience and humble all the time.

Lorika Nancy was born in 1993 in an area called Namurunyang of Kapoeta, Eastern Equatoria State.

“It was hard studying there because of the war, we used to cancel school most of the time and run to the bush, Antonov would be bombing Narus almost every day.” Nancy recall a moment during the Sudan civil war.

Being the first born, Nancy says she likes cooking local dish during her free time.

“My favorite dish is Okra with kisra. I cook most of the days, unless am flying the whole day and come home tired.”