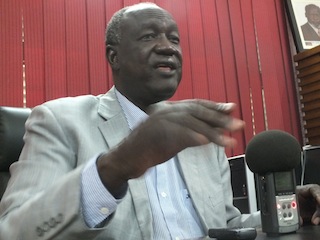 The government is asking Sudan to deny any opposition forces safety in Sudan by seeking cooperation from the Sudanese government.

The Minister of Defense, Kuol Manyang Juuk, traveled to Khartoum yesterday to meet with his Sudanese counterpart to discuss border security.

Kuol told the media at Juba International Airport that his visit is to strengthen security agreements between the two countries.

“We have the issue of some negative elements that are lingering around the border –  our own rebels of Riek Machar and Taban Deng Gai –  are seeking support from the neighbors,” he said.

“So this are same issues we want to bring to the attention of the Sudanese government; definitely, this people will try to ask for support or bases in Sudan.”

Kuol Manyang also said the meeting in Khartoum is to discuss the possibility of deploying a joint force to monitor the border as agreed in the cooperation agreement.

He was accompanied by the Minister of National Security, Obuto Mamur.