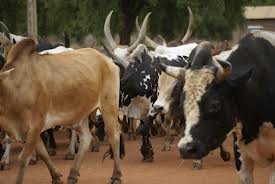 Heads of cattle being driven elsewhere in South Sudan

Twelve people have been killed and several others injured in a cattle raid in a remote village of Jonglei State.

Mr Akech said the herders had just arrived from the neighboring Pakak locality when they fell into the ambush by a group of raiders.

“The criminals just attacked them there, resulting in the death of 12 people,” he told Eye Radio.

Mr. Dengdit has not said how many were wounded, but he told Eye Radio that the area commissioner has traveled to the scene.

Mr Dengdit said the attackers took more than 2,000 cattle. Mr Akech could not exactly confirm the identity of the raiders, but he suspected they came from a community in a neighboring state.

Efforts to reach the county commissioner have not been successful due to lack of telephone network in the area.

Several similar attacks have left many people dead and others injured in the area.