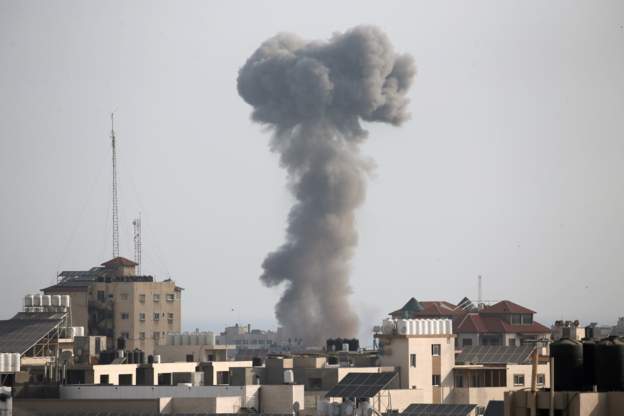 Scenes like this in Gaza have been commonplace in the past 11 days/Reuters.

It says the truce was proposed by Egypt and would be “mutual and unconditional”.

A Hamas official says the ceasefire will come into force at 02:00 local time (23:00 GMT) on Friday, but Israel has not confirmed this.

“The Political-Security Cabinet unanimously accepted the recommendation of all security officials, the chief of staff, the head of the Shin Bet [internal security agency], the head of the Mossad [foreign intelligence] and the head of the National Security Council, to accept the Egyptian initiative for a bilateral unconditional ceasefire, which will take effect at a later date,” the statement from the Israeli security cabinet said.

“The chief of staff, the military echelon and the head of the GSS reviewed before the ministers Israel’s great achievements in the campaign, some of which were unprecedented.”

It added: “the political echelon emphasizes that the reality on the ground will determine the continuation of the campaign.”

Egyptian President Fattah Al-Sisi has ordered two security delegations into Israel and the Occupied Palestinian Territories to work towards upholding the ceasefire, according to Egyptian state TV.

As the ceasefire was confirmed by Israel, the Israeli military said warning sirens were sounding in southern Israel, indicating that rockets had been fired from Gaza.

Fighting began in Gaza on 10 May after weeks of rising Israeli-Palestinian tension in occupied East Jerusalem that culminated in clashes at a holy site revered by both Muslims and Jews. Hamas began firing rockets after warning Israel to withdraw from the site, triggering retaliatory airstrikes.

At least 232 people, including more than 100 women and children, have been killed in Gaza so far, according to its Hamas-controlled health ministry. Israel has said at least 150 militants are among those killed in Gaza. Hamas does not give casualty figures for fighters.

In Israel 12 people, including two children, have been killed, its medical service says. Israel says some 4,000 rockets have been fired towards its territory by militants in Gaza.