You are here: Home  |  News   |   “I’ll reach out to Spiritual leader over abductees”, says Ayod commissioner 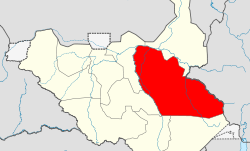 The Commissioner of Ayod County in Jonglei State says he is yet to find out if the White Army’s spiritual leader is indeed holding several children and women abducted from the Chollo Kingdom.

On Wednesday [January 18, 2023] an elder from the Chollo community appealed for the immediate release of around 100 abductees still being held hostage in Jonglei State.

Spiritual leader Machuach Tot who hails from Ayod County of Jonglei State was previously accused of mobilizing the white army to attack villages in the Chollo Kingdom.

Commissioner Chuol promised to contact him over the matter.

“I have not heard it yet because his location doesn’t have network coverage. If he comes back to the County,” said Chuol.

“As Commissioner, I will go in person to that place [location] where he is to find out if he is holding the children or not, but the only challenge is that the place doesn’t have network coverage.”