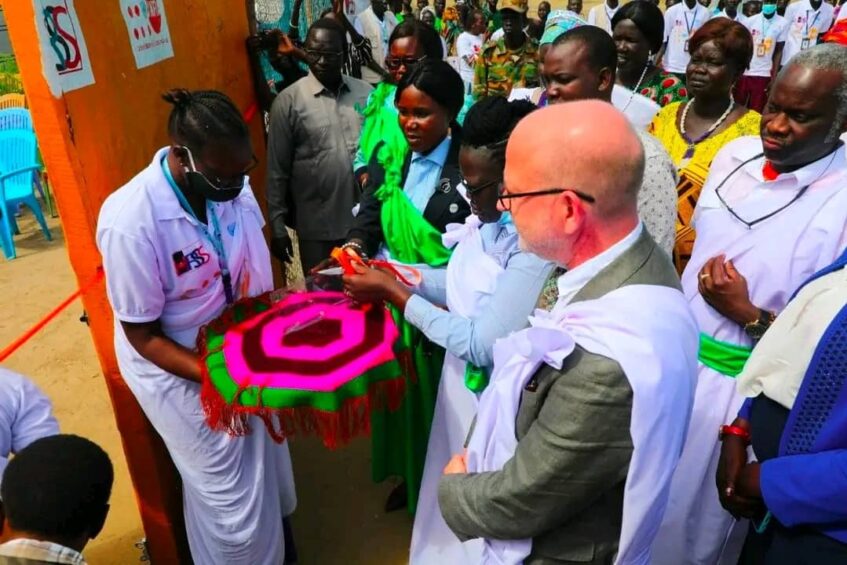 Minister of Gender and Social Welfare Aya Benjamin Warille, the head of Sweden’s mission in South Sudan, Tom Brundin, and UNFPA officials during the lauch of safe space for girls, and women in Leer County on Wednesday - COURESTY

The National Minister of Gender and Social Welfare and UNFPA have launched a safe space for women and girls in Leer, Rubkona and Mayendit counties of Unity State.

The friendly spaces were officiated on Tuesday in the three counties – where women have borne the brunt of years of conflict since 2013.

At the center, the beneficiaries will have access to information and services such as psycho-social support, comprehensive case management and unconditional cash assistance.

They will also benefit from life-skill trainings, and income generating activities such as baking bread, liquid soap production, and knitting among others.

Speaking at the event, the Minister Gender Minister, Aya Benjamin Warille said ending GBV in the country is a collective responsibility.

“They are our husbands and sons, we can’t let them out, sometimes I think of having safe space for men and boys, so they can tell why they are doing this to us,” Aya said.

“Its collective responsibility, everyone has a role to play, our men please, stop raping and beating your women and stop selling them, allow them to become mature.”

For his part, the head of Sweden’s mission in South Sudan, Tom Brundin says the partners are committed to supporting the Ministry in its effort to address GBV in the country.

“We will remain engaged in supporting your work and the people of South Sudan in promoting their health, safety and well-being specially for those who are more vulnerable,” said Brundin.

The Women and Girls Friendly Space (WGFS) targets over 4,000 women and girls in the three counties.