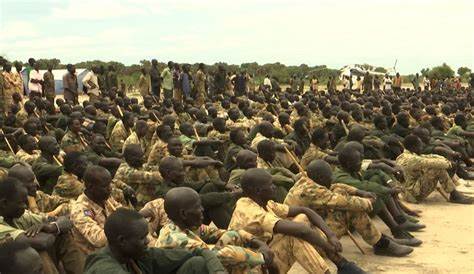 The committees tasked with the graduation of the necessary unified forces have finally received their funding from the government.

The announcement was made yesterday during the regular Council of Ministers Meeting in Juba.

The committees include the Joint Defense Board, Joint Transitional Security Committee, and the Joint Military Ceasefire Commission.

About 53,000 forces are expected to graduate from the training camps. They include the army, police, and national security, among others.

The revitalized peace agreement expects the unified forces to be 83,000.

According to the Minister of Information, the president has directed the three committees to commence their work as soon as possible.

“These three committees got their funding today and they will be leaving as soon as possible”, Makuei told reporter after the cabinet meeting.

Michael Makuei however, reiterated that, the forces will graduate with sticks due to lack of arms for the soldiers.

“We will graduate them with sticks because the International Community is on our neck and they are saying we are not serious”, Makuei stated.

The graduation has been postponed several times due to “lack of funds”. But observers call it “lack of political” given the millions of dollars the government offered the NTC.

There are thousands of troops drawn from the SSPDF, SPLA-IO, and the Opposition Alliance across the country.

They have been at the training camps since 2019.

Some soldiers have been deserting these training centers due to a lack of food, medicines, and safe clean water.