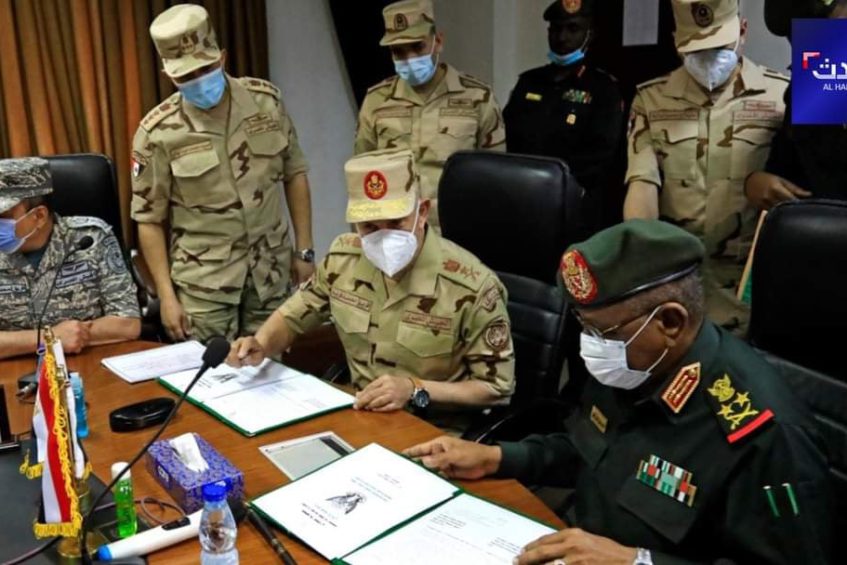 Egypt and Sudan signed a military cooperation agreement, this is according to Egyptian Daily Newspaper.

Mohamed Farid, Chief-of-Staff of the Egyptian Armed Forces, and his Sudanese counterpart Muhammad Othman Al-Hussein inked the military accord in the Sudanese capital, Khartoum on Tuesday.

Chief-of-Staff of the Egyptian Armed Forces said that both countries face common challenges and threats to their national security.

He added, in a press statement, that the two countries are witnessing an unprecedented level of military cooperation, expressing Egypt’s desire to achieve better coordination between both militaries.

Farid stressed that Egypt seeks to “consolidate relations with Sudan in all fields, especially military and security.”

For his part, Al-Hussein said the agreement aims to protect the national security of the two countries and exchange experience and knowledge in the military field.

He also thanked Egypt for standing by Sudan in difficult situations.

In a separate development, the Sudanese Minister of Foreign Affairs, Dr. Mariam Al-Sadiq Al-Mahdi on Tuesday was received in Cairo by her Egyptian counterpart Sameh Shoukry, on her first visit to Egypt.

Sudanese Foreign Minister is currently visiting Cairo within the framework of participating in the ministerial meeting of the Arab League.

According to the Sudan news agency, Dr. Mariam and her Egyptian counterpart have affirmed keenness to enhance cooperation between the two countries and activate the mechanisms of joint bilateral cooperation.

In a joint statement issued on Tuesday, the statement pointed out that within the framework of fraternal contacts and continuous consultation between the governments of Egypt and Sudan.

During the bilateral talks, the two sides discussed opportunities to develop cooperation in the field of investment in a way that achieves the mutual interests of the two countries.

For her part, the Sudanese Minister of Foreign Affairs told Sudan news agency that the Egyptian President Abdel Fattah Al-Sisi will visit Khartoum in the coming days.

She said during the visit Al-Sisi will meet with the Chairman of the Sovereignty Council, Lieutenant General Abdel Fattah Al-Burhan.

The two leaders are expected to discuss on ways of fostering bilateral relations, common agendas, and regional and international issues of common interest.

Al-Sisi’s visit to the country is expected to start next Saturday, according to Sudanese official news agency, SUNA.

Sudan has long maintained a substantial (though occasionally prickly) relationship with Egypt that was firmly founded on history and the Nile.

Combined within Ottoman Egypt and the Anglo-Egyptian Condominium (and even earlier dating back to Cushite Pharaohs), Sudanese and Egyptians refer to themselves as brothers.

However, relation between Sudan and Egypt had been strained, dating back to the 1995 attempt on the life of then-Egyptian President Hosni Mubarak in the Ethiopian capital, Addis Ababa, which Egypt accused Sudan’s government of facilitating.