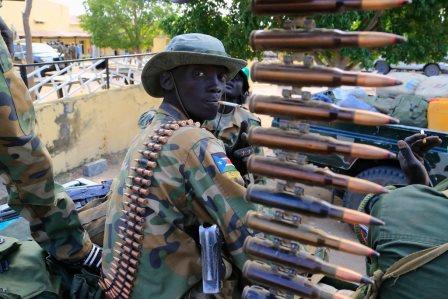 Defense Minister Kuol Manyang yesterday confirmed that the government has bought a $14.5 million shipment of arms and ammunitions from China.

The minister said that the government has the right to arm the army.

Amnesty International says the new arms could increase the abuse of human rights.

A ready flow of military weapons from China, Sudan and Ukraine has triggered indiscriminate attacks by both the South Sudanese Armed Forces and armed opposition groups, wrote Amnesty International.

“Governments must immediately stop supplying South Sudan with conventional arms which have been used to commit violations of international humanitarian and human rights law until adequate systems of training and accountability are in place,” Erwin van der Borght, Amnesty International’s Africa Director, said in a statement.

However, the Spokesman of the Ministry of Foreign Affairs, Mawien Makol, says imposing an arms embargo on the government will not help bring peace in South Sudan.

Both the government and the SPLM in Opposition are yet to reach an agreement to end the conflict that started in December.