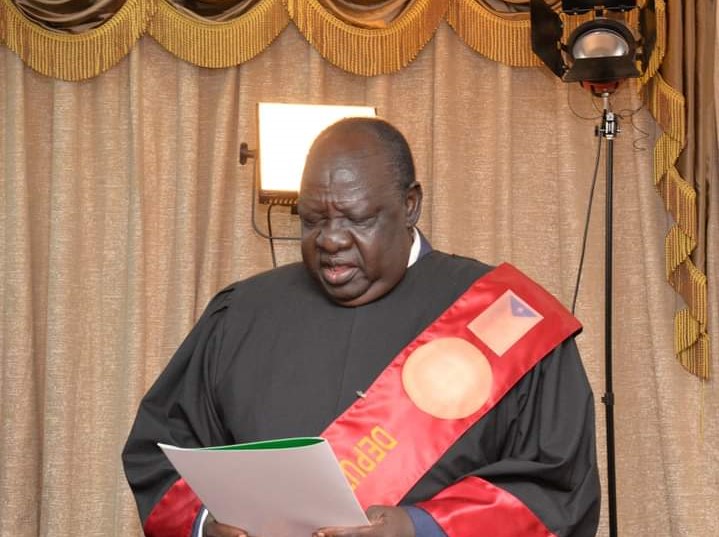 The deputy Chief Justice for South Sudan Supreme Court is calling on citizens to report any injustices despite huge legal backlog and the general judicial paralysis in the country.

“I just wanted to tell everybody that access to justice is actually a constitutional right of everybody,” said John Gatwech.

Reports show that South Sudan has 274 judges on the government payroll, some of whom have resigned due to poor pay.

As a result of lack of working judges, several states have reported prolonged detentions, absence of hearings and the abuse of basic rights.

The judiciary, in addition, has experienced several strikes over the general working condition and pay rise for the justices and judges.

The justices and judges previously called for the removal of the Chief Justice, Chan Madut, who they said had failed to address their demands – a demand the president ignored.

And according to the UN, South Sudan’s legal system has been seriously neglected due to decades of conflict: lack of court infrastructure and justice services in remote areas; increased unaddressed cases and lengthy periods of detention of suspects.

However, Justice John Gatwech is asking any aggrieved individuals to seek justice.

“I want to tell the people and the public, and especially the IDPs, that you are free to come to the court whenever you think that there is reason for you to address the court,” he stated during a roundtable discussion on access to justice organized by UNHCR in Juba on Wednesday.

But some families of victims of various crimes, particularly violence, have been demanding for justice for their loved ones.

For instance, in Northern Bahr el Ghazal, police say suspects are still in cells even after they completed investigations into the crimes – a situation they blamed on the courts there.

The cases include killing of a trader, a child, a mother and a young man.

“All these cases have been investigated successfully and the case files have been sent to the court,” Capt. Guot Akol, state police spokesperson, told Eye Radio.

For his part, a human rights advocate, Reec Malual, called upon the government to look into the matter…

“Because you cannot have 13 million people in South Sudan as estimated by the Bureau of Statistics and then you have less than 300 judges. That’s not making sense.”

Some observers argue that lack of access to justice is a contributing factor to revenge attack in some states, particularly Jonglei, Lakes, Western Bahr el Ghazal and Warrap.

In 2020, a local civil society group warned of a potential of the public to resort to mob justice if the authorities do not respond to crimes promptly.

Scholars define mob justice as when a person suspected to be a criminal is beaten by a group of people or crowd with clubs, stones, machetes, or anything they can lay their hands on.