You are here: Home  |  News   |   Deadly police-thugs clashes not an attempted robbery on BoSS – police clarifies 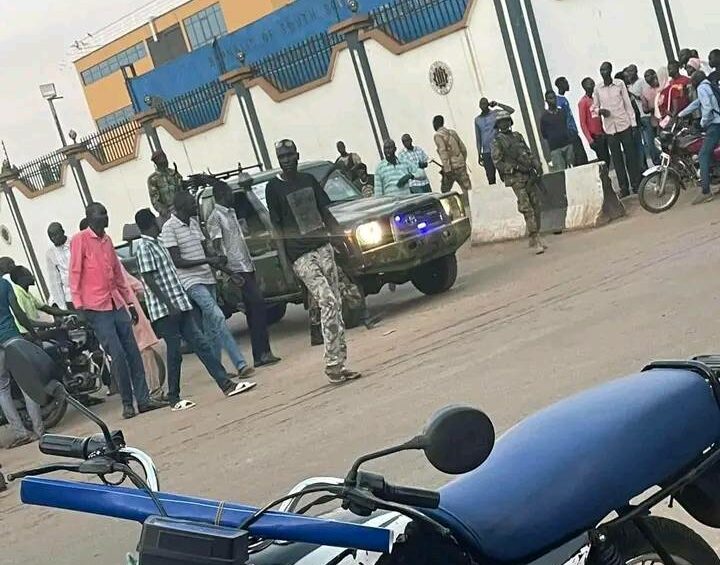 People go about their business amid a heavy security deployment at the crime scene outside the Bank of South Sudan. (Photo: Courtesy).

Police in Juba have clarified that the shooting incident which left five armed bandits dead Friday, was not an attempted robbery on the Central Bank.

On the evening of December 16, police officers were involved in a brief gun battle with a group of armed men outside the premises of the Bank of South Sudan offices in Juba town.

Following the incident, the Bank released a press statement saying the police have successfully quelled an attempted robbery on the Bank.

However, the Police Spokesperson Maj. Gen. Daniel Justin said fleeing burglars, who had looted elsewhere only met their fate near the Bank, after clashing with security officers.

Speaking at a late evening news conference in Juba, General Justin said the armed bandits had stolen money from a car parked near the Petroleum Ministry.

“The central bank has nothing to do with the robbery that happened yesterday, but it occurred near the bank area,” General Justin told the press shortly after the shooting.

He went on to say that the gunmen driving Toyota Premio were dislodged by the police, and pursued up to the Central Bank, where they were killed.

“The theft happened at the ministry of petroleum, then we managed to identify the car plate number type through the CCTV cameras. The response came that the car was parked at the juba commercial playground.”

General Justin said the armed bandits refused to obey the police orders to surrender, and instead opened fire on police.

The security official added that after the police returned fire, one of the robbers died on spot, and the other wounded four died on the way to the hospital.

“The moment our forces arrived at the spot, the car started moving toward Juba and when it reached the central bank the car was blocked where they started opening fire when one of them died and the other four died on the way to the hospital to receive treatment.”

Justin says a case has been opened at the northern police division and that the identity of the armed robbers will be revealed after the investigation.