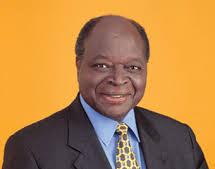 Former Kenyan President Mwai Kibaki is urging leaders in South Sudan to immediately end the hostilities so that civilians can return to their homes.

Mr. Kibaki made the statement yesterday when leaders from the Intergovernmental Authorities on Development paid him a visit in Nairobi.

IGAD awarded him for his contribution to regional economic integration, peace, security and development in the Horn of Africa.

“When you see people trying to move back to Kenya where they were living before, and you see others trying to leave to other regions, it’s not because they want to, but because they see the challenge as very serious and they don’t see it being solved quickly,” he said.

“Then you ask; what is our role…what role do we have? Like all great decisions, there is always a certain measure of sacrifice in each individual who is involved, and is called upon to make that little –little concession –here and there.”

Mr. Kibaki urged IGAD member states to continue persuading the government of South Sudan and the SPLM-in Opposition to resolve the crisis through dialogue.

He said IGAD should also continue to safeguard stability in South Sudan.

“I commend them for these efforts, and urge them to not relent, until lasting peace is obtained in Africa’s youngest state.”

Mr. Kibaki said if the ongoing conflict in South Sudan is not resolved quickly, it would disrupt peace and development in the region.

He stepped down as the third Kenyan President in the 2013 general elections.