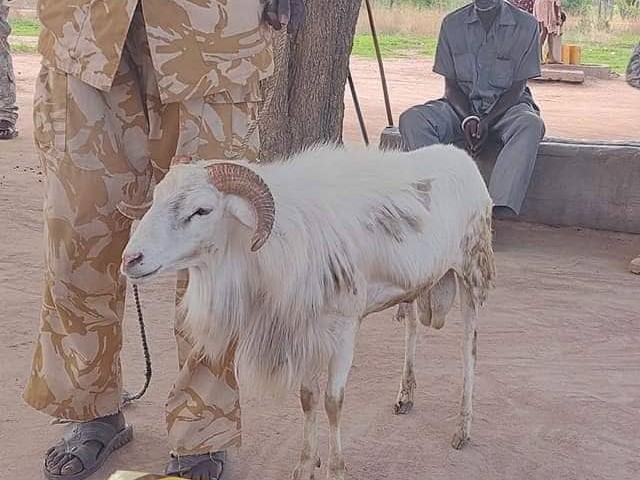 A customary court in Rumbek East County, Lakes State has fined the owner of a ram which killed a woman in the area recently.

The five-year-old ram was arrested by police for knocking dead a 45-year-old Adhieu Chaping last week.

The angry animal was near the late when it repeatedly pounced on her ribs as she attempted to stand up.

On Monday this week, a customary court in Rumbek East County presided over the case and requested the owner of the Ram and the family of the deceased to settle the matter.

The unnamed owner of the ram then pledged to give five cows as blood compensation to the deceased family, a suggestion both parties agreed.

Passing the verdict, the customary court endorsed the agreement and ordered the owner to pay a fine of one cow to the court.

Elijah Mabor, Lakes State Police Spokesperson, told Eye Radio that the ram will remain under police custody for the next two weeks to allow the owner to pay the due fines.

“It will remain in custody in the meantime. Either the court will decide to release the ram to be given to the owner or it will be kept until the fine is paid,” he said

According to the customary laws in Lakes State, any domestic animal that has killed a person is given as a compensation to the family of the deceased.

Last week, a professor of Law at the University of Juba told Eye Radio that the arrest of a ram by Lakes State police is the correct procedure, which is warranted by the law.

Geri Raimondo, who is also a former Justice of the Court of Appeal of the Judiciary, said the step was necessary to force the owner to appear for settlement of the case.