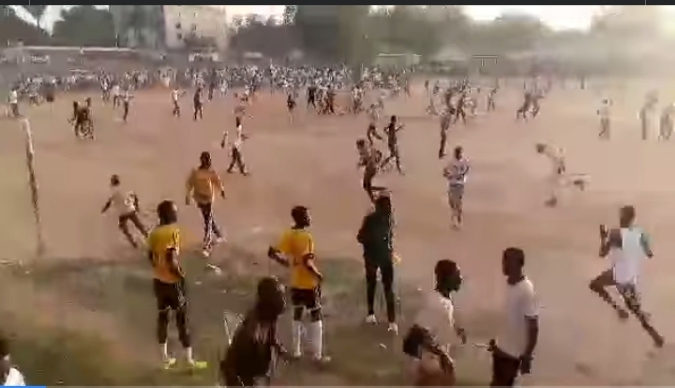 Unruly youth are seen charging at each other with sticks and stones following a football match between Mayom County and Rubkona County of Unity State. | Photo: Courtesy.

The police have arrested six youth for allegedly instigating a riot between rival groups of football fans, following a peace tournament in Juba on Tuesday.

However, Tuesday’s peace match between Mayom and Rubkona counties, in Juba One playground turned violent after Rubkona beat Mayom 3-2.

According to the Police Spokesperson Major Gen. Daniel Justin, the rival youths started rioting with sticks and stones following the match.

“After the match finished, there was a verbal altercation between the fans of the two teams they reported the accident to the police we arrived there and found two vehicles Nissan and Noah were damage,” he said.

Meanwhile, a video footage of the after-match violence showed unruly youth invading the field and pelting one another with stones, before security forces arrived and fired in the air.

In the video footage obtained by Eye Radio, a few young people were seen with bleeding injuries.

The police official said the security forces managed to arrest six suspects who are currently under an investigation.

“We managed to arrest six people and we file case against them and now they are under investigation and there no injuries,” he said.