You are here: Home  |  News   |   UN calls for a one-month ceasefire to allow delivery of relief aid 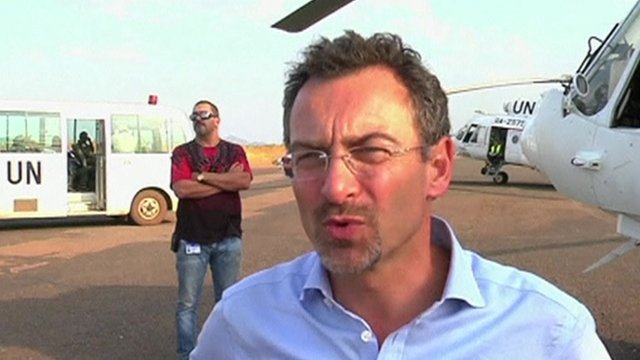 The United Nations is calling for a one-month ceasefire in South Sudan to allow for the distribution of relief supplies ahead of the rainy season.

The one-month truce is meant to allow free movement of both the people and humanitarian agencies to supply the relief items to the IDPs.

The UN plans to reach about 100,000 displaced people with the humanitarian supplies.

UN Humanitarian Coordinator for South Sudan Toby Lanzer told Eye Radio that the month of tranquility will ensure that people are safer and move freely without fear of violence.

“I want everyone to join me in this message to call on the parties to the conflict, call on the people who are still fighting—the men with arms, call on them to lay down those arms during the month of May to help people to increase the space, to give them the chance to go out to the fields and to plant their crops so that at the end of the of the year, we have the harvest which is what we really want for the people of South Sudan,” he said.

Mr. Lanzer, who is also the Deputy Special Representative of the Secretary-General in South Sudan, said the ceasefire will impact on the lives of millions of people.

Mr. Lanzer said the only way to reverse what he calls “grave humanitarian crisis” and its consequences, is to find a political solution to the conflict.

The UN says that up to seven million people are at risk from food insecurity around the county.