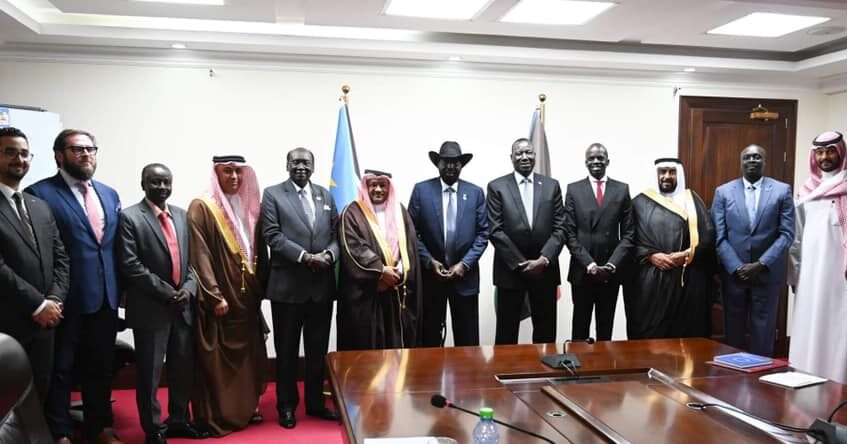 Business Associates from the Kingdom of Bahrain in the Gulf region have expressed interest to clear the external debts of South Sudan by investing in the country.

According to the presidential press unit, President Salva Kiir discussed plans to strengthen the business relations between South Sudan and the Kingdom of Bahrain.

“The delegation expressed interest to reduce Country’s outstanding debt by consolidating and paying down loans with energy resources, while strengthening energy stability with additional focus on planning initiatives to improve public health, and other areas of mutual importance to South Sudan,” reads the statement.

Meanwhile, the state-owned television SSBC reported, that the Minister of Finance and Planning Agak Chuil Lual held meetings with the Bahrain’s delegation on ‘areas economic cooperation.’

“The team came to discuss with us economic cooperation between the two countries, between South Sudan and the kingdom of Bahrain. The discussion went well for the last two days and we have reached an agreement,” Agak said.

The visiting team, the minister said, expressed interest to reduce the country’s outstanding debt by consolidating and paying down loans with energy resources.

“They going to help us in issues concerning economics because they going to invest some of their capital, the money into our economy in South Sudan in different fields, so this understanding is a very good and will lead to an agreement between us and kingdom of Bahrain.”

Both parties are expected to sign a Memorandum of Understanding on cooperation after deliberations.

South Sudan external debts have not been made public.

However, in March this year, the Business Insider Africa listed South Sudan among the twenty countries with the highest debt-to-gross domestic product ratio in the continent.

The modalities the Bahrain business associates will use to clear the debts are yet to be announced.