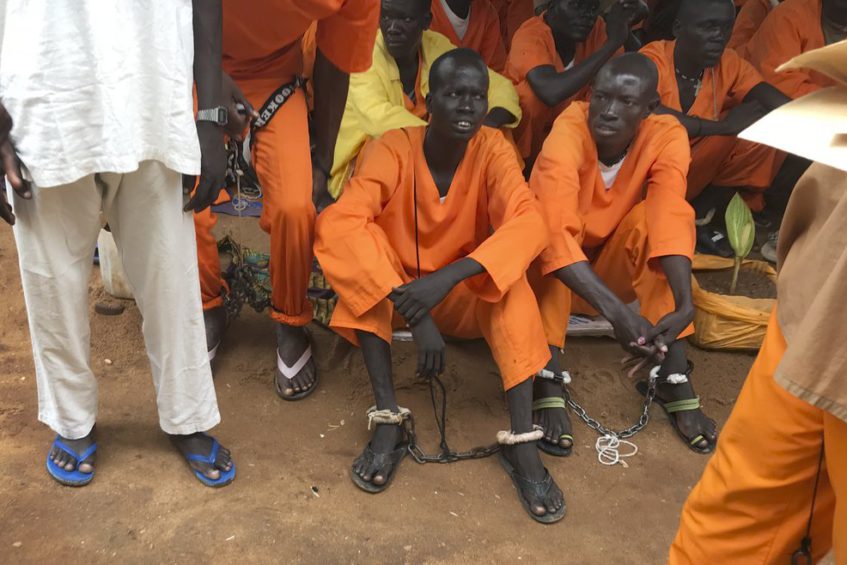 A photo showing prisoners sitting together at the central prison in 2020. Photo credit: Curtesy

An activist in Lakes has accused the state authorities of arbitrarily detaining dozens of locals over alleged crimes committed by their family members.

Daniel Laat is the state Coordinator of Community Empowerment for Progress Organization or CEPO.

He told Eye Radio that his office has so far documented about 62 proxy arrest incidents in the last 12 months.

According to Laat, some of the detainees are kept in hidden locations being guarded by military personnel.

“We have been monitoring and we discovered about 62 cases from 2021 up to January 2022 and this are only few areas that we have visited”, Daniel Laat disclosed to Eye Radio.

Laat called on the state authorities to free the detainees saying proxy arrest is illegal.

“They  have different illegal cells that are being controlled by the military and they should be released”, Mr. Laat stated.

However, Benjamin Makuer Mabor argued that the move aims to force families to reveal criminals who have been hiding from arrest.

These families agree and hide the culprits and they don’t want to avail the culprit before the law”, Benjamin Makuer claimed.

“So defiantly, the direct person who is responsible for that culprit has to be arrested in order to compel the culprit to report himself to the scene of law”, Makuer explained to Eye Radio.

Commenting on the matter, a former Judge at the Court of Appeal described the substitute arrest as unconstitutional.

“Proxy arrest is unconstitutional according to the provision of article 19 of fair trial”, Raymondo said.

In recently years, Lakes State has been disturbed by a circle of communal violence observers attributed to revenge killings and cattle rustling.

After his appointment, the state governor, Ring Tueny launched a crackdown on criminals and conducted voluntary disarmament exercise in the restive region.

However, activists have often raised concerns over allegations of human rights violations by the state authorities.