2nd round of peace talks begins today at 5pm – IGAD 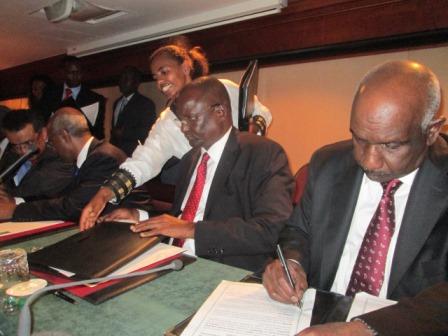 The Intergovernmental Authority on Development, IGAD, has announced that the official opening of the second round of talks will take place at the Hilton hotel in the Ethiopian capital, Addis Ababa, at 5pm.

The IGAD mediation team said the second round of negotiations on South Sudan will be all inclusive.

The Special Envoys of IGAD, the regional body mediating the peace talks between South Sudan’s conflicting parties, recently made a two-day visit to South Sudan where they held discussions with President Salva Kiir, opposition parties and civil society organizations.

The spokesperson of the government delegation, Michael Makuei Lueth, told the state-run SSTV yesterday as he was leaving for Addis that the government hopes to sign a ceasefire agreement with the delegation of Dr. Riek Machar.

“We’re going with an open mind, fully authorized by His Excellency the President of the Republic, to go and negotiate on whatever issues that will be raised there,” he said.

Hon Makuei added that the mediators have not informed them about the agenda of this coming phase.

“Nevertheless, we’re going there to ensure that we bring peace to the people of the Republic of South Sudan.”

The IGAD special envoy for South Sudan, Ethiopian former foreign minister Seyoum Mesfin, said yesterday that it was necessary to include every stakeholder concerned in the negotiation process so as to bring a sustainable solution.

IGAD has said the second round mediation will address issues of political dialogue and national reconciliation.

The second phase of talks between the two parties resume this evening.