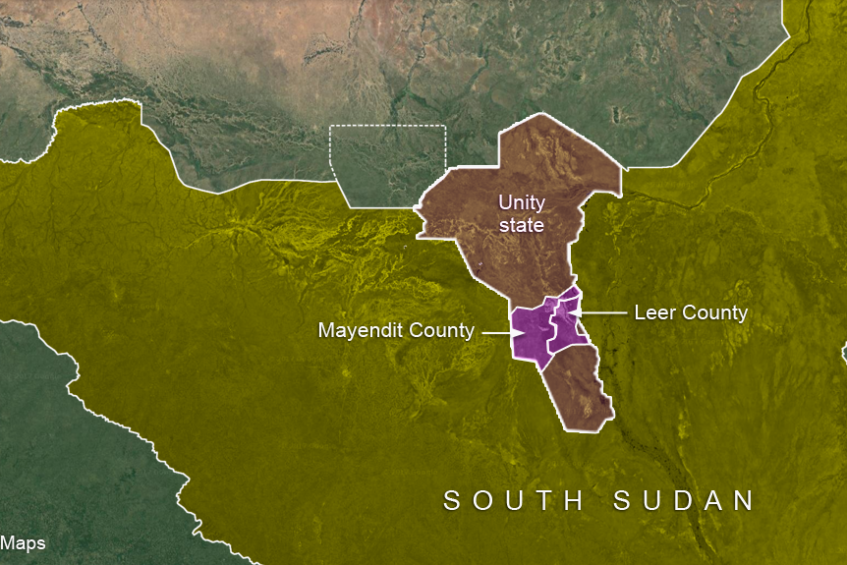 Map of Mayiandit and Leer Counties in Unity State - Courtesy

At least 20 youth have been killed in Leer County of Unity State following a cattle raid attack in the area by youth allegedly from a neighboring Mayiandit County, the Commissioner of Leer County has said.

Commissioner Stephen Taker alleges that Mayiandit youth allegedly attacked Leer town on Sunday where 21 people were killed -15 from the attackers and 6 from Leer.

Taker says that one of those killed from the attackers’ side was identified as the bodyguard of Mayiandit Commissioner.

“We thought that they were civilians but very unfortunate, they have the soldiers among them, the bodyguards of the Mayiandit County Commissioner were killed in the fighting of yesterday [Monday],” Commissioner Taker told Eye Radio.

“I immediately called the County Commissioner on phone while the guy was already killed and then the phone was picked up by somebody and then he said if this guy is still alive, don’t kill him, he is my bodyguard,

“The one who talked to him told him, Commissioner, he is your bodyguard, security personnel in your office and you are sending him to go and loot the cows, what is the reason and we thought that the fighting is between youth and youth,

“The man on phone told the commissioner that if he is the one who influenced the youth to come and loot the cows, that will be raised up to the State authority, actually, we raised it to the governor”.

Dr. Gatluak also refutes involvement of his security personnel in the conflict.

“People who have gone to attack the training center are criminals, they are criminals who steal cattle at night and then this group is not only from Mayiandit, youth from Leer and other areas are among them,” Mayiandit Commissioner said.

“No one sends people to go and raid.  First, the deceased is an SSPDF and he does not even work with SSPDF but again, my security personnel are not soldiers, they are police”.